This past weekend, as you may have read in Moe’s pictorial ride report that we rode Aliso Woods. On our way down to a place called Dripping Cave, we stopped to rest and wait for the remainder of our group to catch up. As we were waiting this guy on a green single speed muscles his way up one of the hills. So in my normal social way, I started talking to the guy about single speeding and how I was at this same trail a few days ago with my SS and even commented on how hard it was. 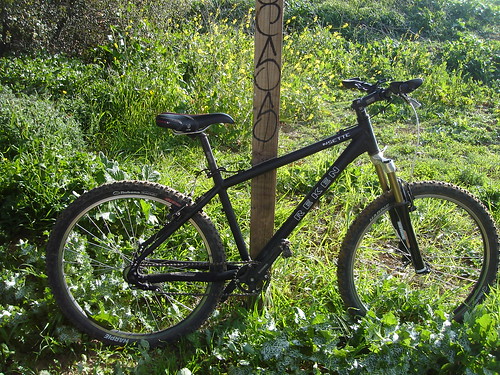 He began telling us that he has been single speeding for nearly 5 years and that SS bikes are better because there’s less maintenance involved with them. It wasn’t until recently that he actually broke something on his bike, the chain. Joe Solancho asked him about the shirt he was wearing, Warrior Society…one of OC’s premiere mountain biking club/teams that are always hosting some crazy race. This fella tells us that he recently broke a new course record on his rigid SS at the Counting Coup race…Before I go on, just picture this guy to be super buff and veins are popping out everywhere. I’ve always have heard about SS riders are buffer because they are constantly grinding through everything. At the same time they’re are pushing and pulling on the bars which in return they get an upper body workout…

After we said our goodbyes, this guy, I think his name is Eric Hunner, I looked up the race results…left a pretty big impression on me. I was motivated to start riding my single speed more than I do my geared bikes. Mind you, this Saturday was the first time I had been on my geared bike since I’ve built up my SS…almost 3 months.

Anyway, because of this stranger I have this new found need to make sure that I master my single speed riding. I know it will be tough and I’m sure I’ll puke a few times, but having to put your body through that kind of harsh work is going to just make me a better rider as a whole.

I do feel kinda wrong talking about how a passing stranger made some sort of impact on me…it almost sounds Smurf encounter. But who cares, I’m pretty glad I did run into that fella, I’m sure its going to help me in the long run.

11 Replies to “Thanks to the dude on the Single Speed”