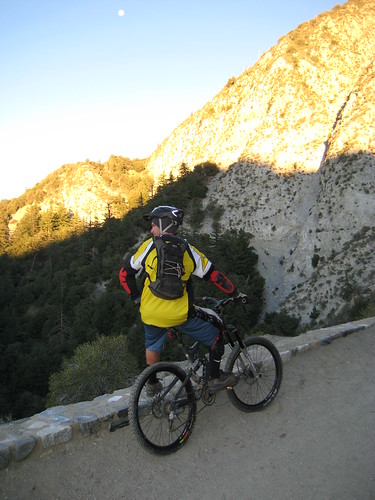 The moon was still out. After the shuttle, we rode a short fireroad climb to the drop in for the singletrack

While most of the mtnbikeriders.com crew was doing some pre-riding of the Fontana race course, a few of us decided to head out to the San Gabriel mountains for some wicked good riding. Even though I don’t know the name of the trail I rode I’m still going to put this trail up there as maybe the best trail I’ve ever ridden. 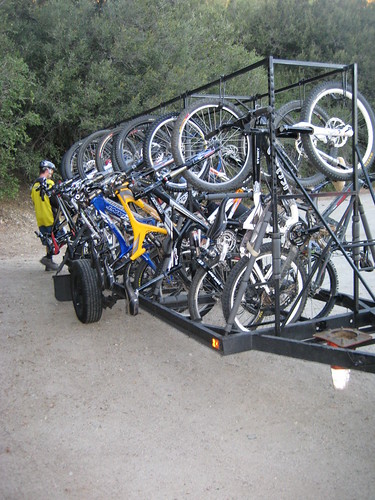 As seen by the bike trailer, the shuttle van was PACKED.

The morning started ridiculously early at 4am. After a long drive, we finally arrived at our destination and proceeded to shuttle to the top of the mountain. The shuttle to the top was a quick half hour affair handled quite ably by our experienced driver. We probably pushed off at around 7am. After a short fireroad climb we dropped into a ton of singletrack that went on and on. 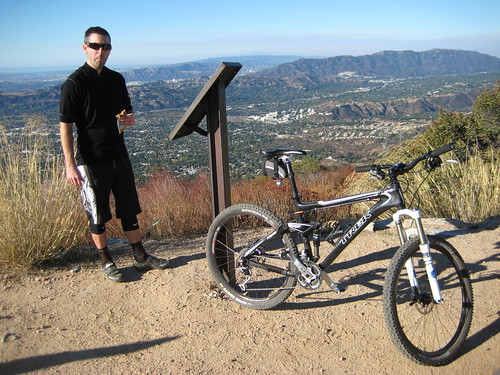 Tim “Scissors” and his Trek at the ruins. Although not the midway point, the ruins did break up the ride into a top “half” and bottom “half”

The singletrack was an absolute blast. The trails we rode were broken into two sections in my mind: a top half and a bottom half. The top half was a bit more sketchy, loose with more rocks than the bottom half. I was beginning to understand why everybody else on the shuttle had full suspension bikes with at least 5+ inches of travel. I was on my Redline 29er hardtail and was getting a little beat up, as expected. It also didn’t help that I ate it twice… the bike is ok as am I, thank you for asking. 🙂 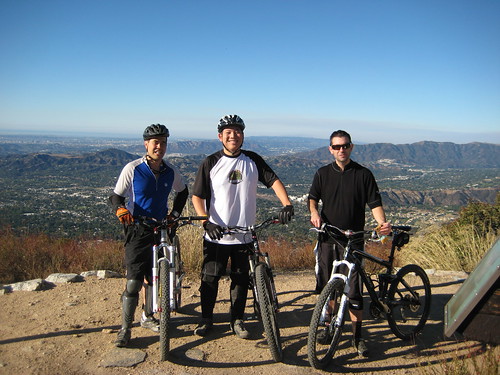 Although the top half was a bit more hairy it is definitely something I want to get better and faster at. I got a flat at the beginning of the ride and as I was swapping out the tube, I got to see some of the downhill bike guys speed by. They were carrying a LOT more speed than I was down the trail which was very cool to watch and aspire to. Wayland, being the nut that he is, kept saying that he wanted to do this on his rigid SS. Love the guy, but he is definitely certifiable. 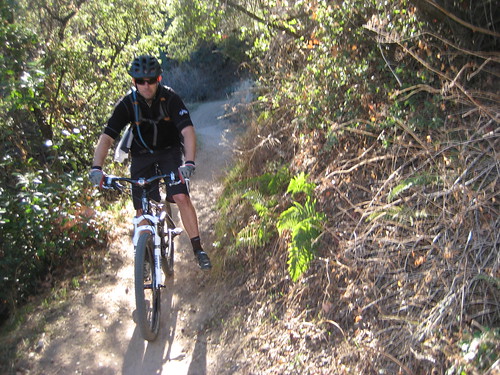 Tim, coming to a halt as we regrouped during the sweet singletrack. Lots of tree coverage here which is something I don’t see a lot of on some of the trails I ride in Orange County.

The bottom section which included Millard & El Prieto (among others), were also fun, but in a different way. The bottom half was less technical but much more flowing with lots of switchbacks and even a stream or two to cross. There were some stretches where we were doing some fireroad climbs exposed to the sun, but even these were balanced by the amazing views the climbs gave us… provided you weren’t too tired sucking wind to look at anything beyond your front tire. 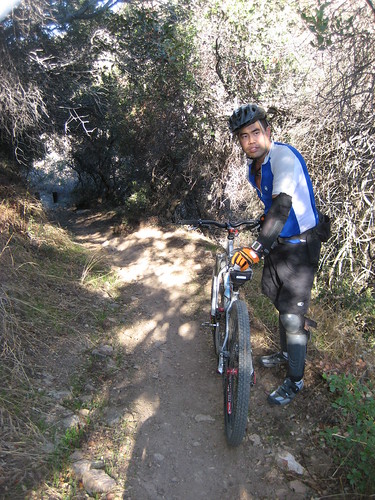 Wayland waiting for us. Our original ride leader, Calvin, wasn’t able to make it to the ride due to some fires so Wayland led the way. He did a great job since we never back tracked once. Thanks W.

The trail did claim some victims, namely me: 2 flats, two falls (one OTB and another slow roll through some sharp rocks) and a pivot screw falling out from my front brake lever should have dampened my enthusiasm for this trail but it didn’t. This is definitely one of the best trails I have ever ridden. Now if only I knew it’s name… Paging Calvin.