We recently received the Epic Stealth Camera from GSM.  We met the folks of GSM at Interbike in September and they had agreed to send us a unit for testing.  Since RL and I had planned on doing some practice downhill runs, I decided to put it to use. 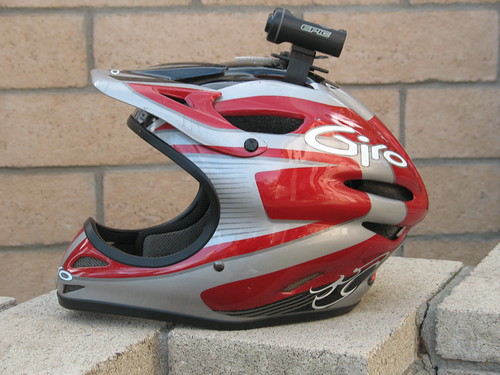 I’ll be riding with the EPIC Stealth Cam in the next few months and will be posting follow-up reviews.  For more information visit their site at www.epicstealthcam.com .

On Saturday we headed to the famous Southridge in Fontana, CA.  RL and I were geared to ride the downhill course while Priscilla, Jeremy, Ner and Steve headed to the XC course.  (XC Ride Report to follow from one of the guys).  In the video I was able to capture good footage for my first use.  There’s room for adjustment with the camera placement but footage seems to be ok.

RL and I did two runs.  On the first run we lucked out as Lala from Incycles gave us a lift to the top. This saved us time and energy.  We rode the same course from the last race in November. I was still having issues navigating through the rocks however overall I felt much more confident than last month.  RL on the other hand seems to fly through the course. I’m confident he will do well in the 09 Winter Series.

Second run – we went down behind the water tower down to the singletrack that parallels the paved rode.  On the 2nd run you’ll see two diggers.  First one RL slipping into a rut and the other is me going over the bars (OTB).  You can’t really tell from the video but basically my front wheel hit a rock and I didn’t have enough momentum.  I got bucked and I bailed out while trying to get my footing running down the hillside.  Fortunately RL’s fall was minor and mine resulted in a tweaked back.  Nothing that IcyHot cant fix.

We had a good time despite having only two runs. We plan to come back in about a week.  We definitely learned a lot from this day… learned that the people in Fontana practices safe sex however litters… 🙂

On Sunday – Val, Ner and I headed to Whiting Ranch in Lake Forest, CA.  Both Val and Ner have never ridden this trail before so they were looking forward to it.  While we were getting our gear together, a gentleman drove by and asked if he can tag along since he hasn’t ridden Whiting either; off course we said yes (I believe his name was Mark). After getting ready we all rode to the entrance of Whiting.   There to greet us was a CLOSED sign due to the recent rain.  This was a surprise as it had been four days since the last rain. Whiting Ranch must have received significant amount that many portions of the trail were still wet.

What to do…We were all geared up and no where to ride.  I then suggested that we head to Santiago Truck Trail (STT) / Luge, which was located behind Whiting Ranch.  Reaching our destination, we parked along the Modjeska Rd.  In the video below, our new friend Mark, got stuck on the side of the road while trying to park.  We tried to help him out but to no avail.  He ended up passing on the ride.

Off the three of us we went… up Modjeska Rd to the trailhead.  From here it would be a long 3 mile grind to the Flag.  There were many mountain bikers on the trail that day.  The ride up was refreshing however uneventful.  Reaching the Flag we stopped and rested for a few minutes. 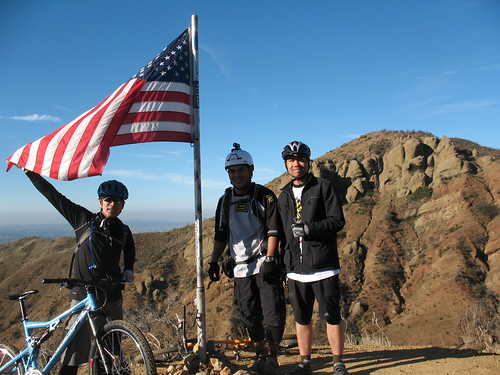 Val touching the flag in honor of his recent US Citizenship.

At this point is a split – you can either continue climbing up to Old Camp or descend down the Luge.  We chose to go down the Luge.  Overall the trail was fun. It’s been quite some time since I have ridden here. Val and Ner had a great time as well. Below is a video documenting our ride.

What’s with all the changes?

1 thought on “Weekend Ride Report – Southridge and The Luge”