OK, no it doesn’t, but mine is. My Sette Razzo build is more of a parts bin build than Joe’s White Zion, but I’m not jealous since mine is a 29er! 😉 The Sette Razzo came to us just under two weeks ago from pricepoint and after finding some parts and picking up a tensioner kit, we finally have it built up.

The decision to go SS was quite easy. Everyone else was doing it, so why not me? j/k. I’ve been intrigued with SS ever since I picked up a SS commuting bike. I have been enjoying my singlespeed commutes to work so much that I knew the next logical step would be to try it out on the trail. Of course my commute to work is nearly flat and the trails are… well not flat. At times, I do wonder what kind of pain I’ve gotten myself into. 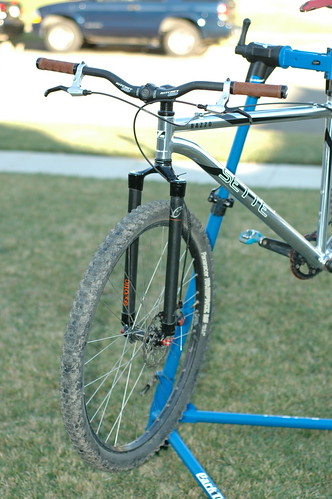 Got to run the bigger rubber up front for more cush. Rigid is tough on the body, but big wheels and bigger rubber makes up for the lack of suspension

Rigid was an easy decision as well. I really liked the eXotic Carbon fork on a previous bike so it was an easy call to go back to rigid for the Razzo build. A carbon fork which dampens some of the trail chatter plus a wide front tire provides me with enough cushion for most of the rides I’ll ever do on a singlespeed bike… at least that’s what I currently think. We’ll see if that changes with more saddle time. One thing I’ll have to be aware of is how much air pressure I run up front. I want enough to prevent pinch flats, but not so much as to lose the cush. 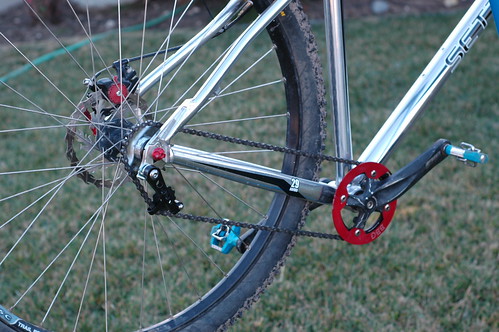 Forte’s Singlespeed Conversion Kit made for an switch to SS. Not the cleanest look, but effective

The easiest decision was getting the Forte Singlespeed Conversion Kit. I received a gift card to Performance for Christmas and we’ve had some good feedback in regards to the kit. But if Performance sold the White Industries Eccentric Eno Disc Hub, I’d have a much more difficult time with the decision. Thankfully, they don’t and my wallet is safe. 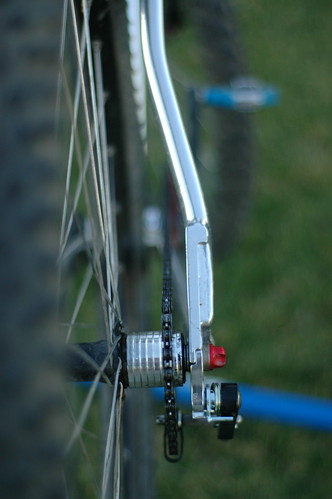 Shiny spacers to go along with the shiny frame. Props to our master mechanic RL for all the help with the build

First ride will be this week. Running through some of the geometry numbers shows I might need to shorten up the stem a little. We’ll see, though. Geometry numbers are just that: numbers. Although geometry numbers can indicate a lot of different things, riding is still the best way to determine comfort. Riding the bike will let me know for sure whether I need to perform a couple of parts swaps. Keep checking back in as I get in some rides on the Sette Razzo.

How to make a Steadi-Cam with a bicycle part

Fat is Where It’s At