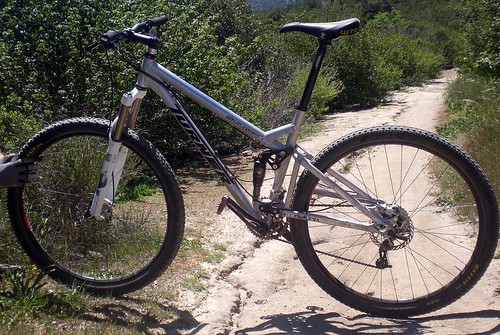 The longest but least technical ride of the weekend sadly belonged to the Turner Sultan. The “least technical” part was not by choice. Scissors and I started out thinking it would be great to get in a longer ride on Saturday morning before the crowds showed up. After looking around we saw a 10 mile tour ride. Sadly the “tour” part meant all fireroad. It ended up being about 4+ miles of fast downhill fireroad proceeded by a long, tough 5+ mile climb. We were able to, in the end, ride some fun singletrack, but that was short lived as we hit the pavement after less than a mile of singletrack and went back to the Sea Otter exhibition area. 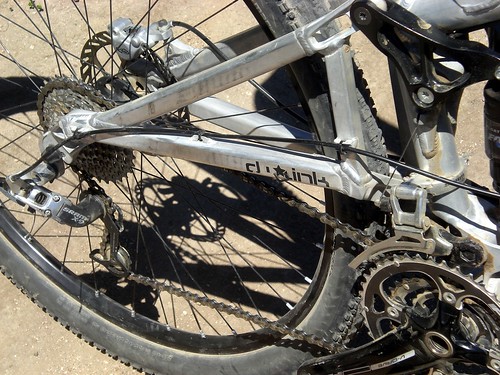 The DW Link is new for the 2009 model year on the Sultan and, correct me if I’m wrong, all Turner bikes

My first thought on the Sultan was: 4.7 inches of travel on a 29er is going to be total overkill for my riding style. I was very concerned about the extra travel robbing me of the pedaling efficiency I experience with hardtails and 3″ full suspension 29ers. Pedaling efficiency was and is key for me because even though I’m more of a XC oriented rider, I’m still a clyde and pedal bob wreaks havoc on my mind.

The Sultan, though, blew me away when it came to climbing. It was extremely efficient even without having to “lock out” or turn on the propedal feature of the shock. I distinctly remember commenting to myself that even though I’m not a fan of long sustained climbs the Sultan’s efficiency made it sort of OK. The 50% more travel than I’m used to (from 3″ to 4.7″) wasn’t noticeable at all when climbing. I expected some bounce and for the shock to be using some travel, but nothing. 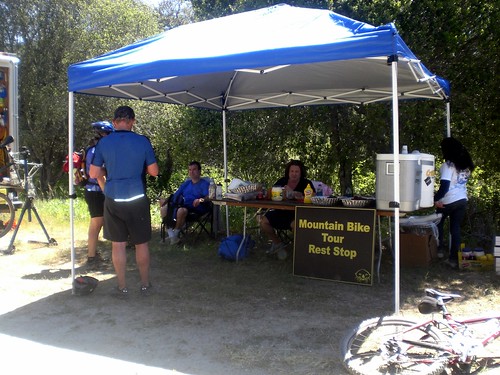 The Off Road 10 mile Tour’s saving grace was a rest stop at the bottom of the descent. Cookies, drinks, made to order sandwiches and a bike mechanic, all for free! You rock, Sea Otter!

On the wide fireroad downhill, the Sultan did great. I mean really, what bike would not have done well in that situation? Poor trail choice by the rider. The singletrack we finally did get to do was new to me but I did get a chance to open things up just a smidge when the coast was clear and I could see ahead down the singletrack a bit. The Turner Sultan did really well in those situations but even then the zip tie showed I wasn’t using all of the travel. I really wish I had some more time on more technical trails to get a good feel for this bike.

It’s that time of year…