Tim “Scissors” was able to get some ride time on the new S-Works Carbon 29er HT from Specialized. Here are his thoughts from the short loop we rode:

So here I am on an all new Specialized S-Works Hard tail 29er made from the fiber of the gods, heading to the trail head with Gary Fisher. Why would Gary Fisher be riding with little ol’ me you say? Well, we just happen to be riding at the same time and at the same place at the land of the Dirt Otter. Gary on his, well you know, and me on the badest Specy Hardtail ever made. Yup, that’s right, the not yet released frame rid’n on the not yet released Roval 29er wheel set. 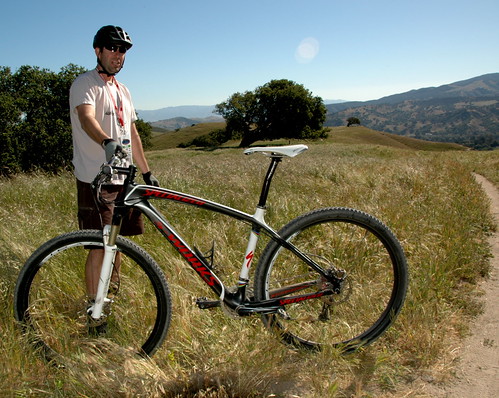 One of my 2 current rides is a 29er hardtail that was geared and is now single speed. This demo is perfect for me since I rode my On-One Scandal geared for a lot longer than it has been a S.S. My Scandal is made from Scandium tubing and the Specy from carbon so an immediate difference in ride characteristics should be noticeable. The Specy was also outfitted with their Fast Track tires in size 29 x 2.0 set up tubeless and mounted on the new Roval 29er wheelset with straight lacing on one side and 2-cross lacing on the brake side. The front fork was a Rock Shox with custom Specialized carbon crown and steer tube. The crank set was a Specy unit with integrated BB; head tube was a 1.5” to 1 1/8”tapered variety, this all made for a very stiff frame laterally. 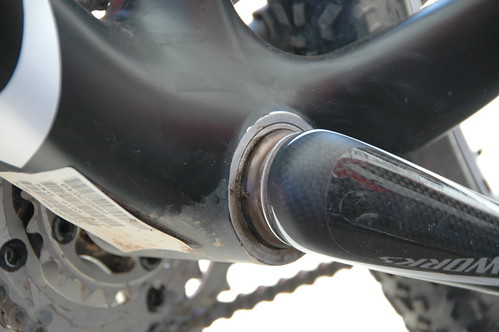 Nic, global sales manager for Specialized, took care to make sure I was sized right on the bike adjusting the seat post height and fork air pressure. With everything dialed in, I hit the trail with Jer. We met up with Gary Fisher and Laura and proceeded to ride about 5/6 miles of almost all single track. First thing I notice of course was how compliant the frame is. It absorbed all the little nuances in the trail but remained laterally stiff at all times. This is definitely not a soft tail but this frame rode very well indeed. The bike was very predictable at speed and on rough trails as long as you were smart about how you rode it; ride it smartly and it rewards you with excellent acceleration, predictable handling and a compliant ride that won’t beat you up. 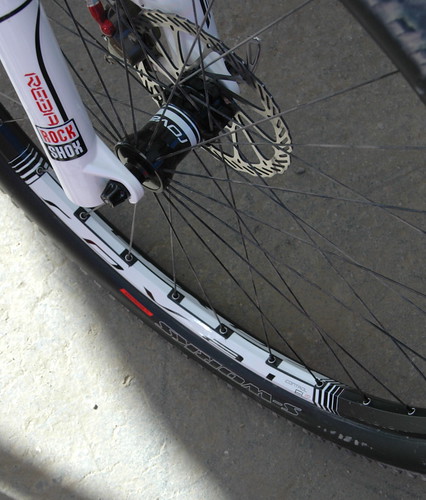 Roval 29er wheels, straight laced on one side, 2-cross on the other

This bike was set up tubeless with the fast rolling Fast Track tires. We got to take home some Fast Traks which will get a full test in the future. I typically prefer a little wider tire than the 2.0’s but I got to say, these tires got the job done without scaring me and the bike went every where I pointed it but remember you have to ride it smartly.

We came to a short but very steep climb. At this point, I was determined to ride it as a S.S. and just see how well it would perform. With Gary Fisher in front of me, I rose out of the saddle and started to hammer. Passing Laura, I continued up the hill where I finally caught Gary at the top resting. I made a comment to him about the bike weighing about 20 lbs and he says “ let me see”, he dismounts his ride and proceeds to pick the Specy up with both hands and says “it weighs a little over 20 lbs”. I guess this comes from years of picking up bikes by hand to determine the weight. Later that on the same ride, while riding next to each other, he looks over at me on the Specy and says “nice bike” with which I return, “ you wanna ride it” he says “no”. I’m not sure why he didn’t want to ride it but, I agree with him, this was a very nice bike indeed!