With three children under 5 years old it has become exponentially more difficult to get out of the house for rides. Over the three day Valentine’s Day/Chinese New Year’s three day weekend, I was able to get out for about 40 miles which is quite a bit for me.

The weekend started when my office closed up a little early in celebration of Chinese New Year… the year of the Tiger, by the way. I was able to get in a short 4 mile ride by running a couple of errands my wife asked me to take care of. That half hour of riding was a little blessing as it was totally unexpected.

On Saturday morning, Dan and I met at 7th Avenue in Hacienda Heights to ride 7th Ave and Turnbull. The route I chose was 15 miles long with 3k feet of climbing. I printed out extensive directions (3 pages) for our ride but 4 miles in, I made a wrong turn and couldn’t back to the correct trail (mental note: keep eyes out for a gps system on the used market). Boo. I promptly started guessing how to get to the next section of singletrack, but to no avail.

After a mile or two of that Dan and I rerouted. We climbed up the wide fireroad leading in from the Whittier side of the trail and hit A-line. We then climbed back up that same fireroad to the colorful water tower and then returned back to the car on my favorite trail of 7th/Turnbull. This section consists of a sweet set of switchbacks under a beautiful canopy of trees. Its fast, flowy and a hoot to ride on. It turned out to be Dan’s favorite section as well. 12.5 miles with well nearly 2500 feet of climbing. Not a bad substitute for the original route. 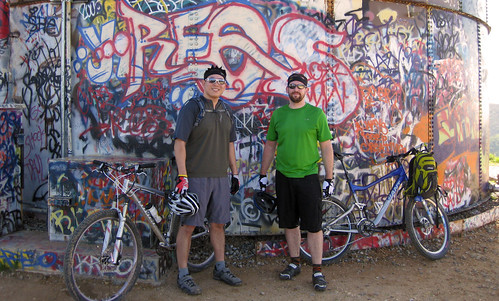 Me and Dan up at the colorful water tower. Niner AIR9 & Giant Trance.

Sunday was a day of rest.

Monday was a bigger mileage ride. 23 total miles leaving from Mr. Scissor’s house to the Mills Loop and Marshall Canyon for about 2200 feet of climbing. My body was killing me on Monday as it usually is the 2nd day after experiencing cramps on a ride. But since the wife had approved of the ride (on Valentine’s Day no less!) I was there. 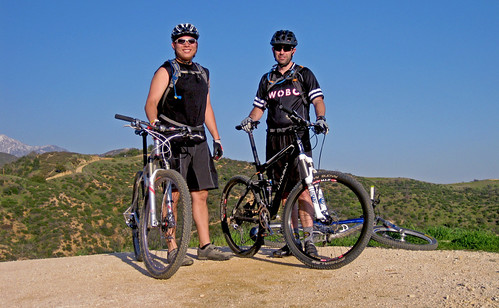 Me and Tim. Beautiful day of late afternoon riding with the setting sun and snow capped mountains in the background. Tim is rolling on the Trek Fuel EX

This ride lasted about 3 hours with a few much needed stops in between. Dan and I were pretty gassed for much of the ride but it was still a blast to hit Mills and Marshall Canyon especially since we were able to get up to the mid-30’s mph when coming back down Mills. The ride back to the house was an exercise in warding off cramps as we were at the three hour mark.

You can’t see it in either of the pictures but I am riding the Prologo Vertigo Nack. I find the saddle to be pretty comfortable, similar to the Rocket V in padding, and durable. A few days after Monday’s ride I got a chance to clean the bike and the Nack was still in pristine condition after over 100 miles of riding. I will keep you posted.

All pictures from Dan the Man