Yesterday Serfas posted on their Facebook Fan Page that they are giving away a pair of Serfas Mountain Biking Shoes.

After some dialogue with Serfas through Facebook…I decided to enter. 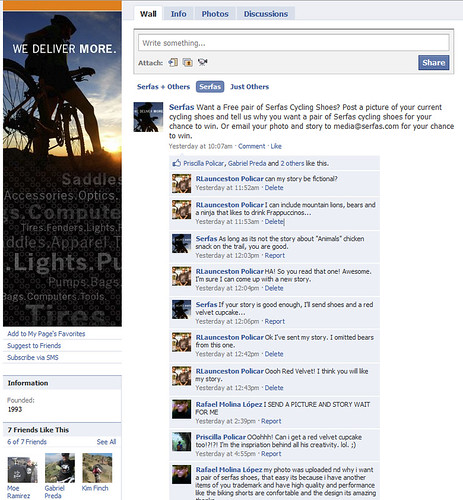 Below is my entry to the contest…enjoy!

My name is RL Policar. During the day, I work as an IT Manager. Some would say that IT guys are nerds and super boring. But in my case, that is not true. You see I am a mountain biker. That in it self makes me cool already. There’s another thing that makes me cool, my Serfas Hydra Sunglesses. Once I slip on the Hydra, my cool factor definitely goes up at least 50 notches. Now when people see me, they think, “That guy can’t be an IT guy, he’s probably some sort of Male Model, Cop, or something cool. But I’m certain he’s not an IT guy!”

One day after a tough day at work. In IT, a tough day would mean sitting in front of my computer watching Youtube videos and commenting on mtb forums all day long. Anyhow, I decided to bring my bike to work on my car in hopes to catch some dirt trails and distress once my shift ended.

I drove down to a local trail called Aliso/Woods Canyon. Upon arriving, I unload my bike, get my gear ready. I make sure my hydration pack is filled, and that my Serfas Hydra Sunglasses as are wicked clean.

The last piece of biking accessory I put would be my shoes. As I look at them, my shoulders drop in sadness. I’ve been riding and racing with these shoes for the last 5 years and boy I tell ya, I’m super depressed about it. Not only do they look sad, but they are faded, torn and downright worn out.

So I muster up enough courage to slip my sad shoes on and try to go for a ride. Each pedal stroke saddens me even more. Man these shoes suck. As I am grinding through trail, I day dream on what it would be like to have some new shoes….My shoes are so bad that when I am engaged to my SPD pedals, I can feel the SPD cleat underneath my foot, ouch! I finally get to the base of a trail called Cholla. I start pedaling and the trail gets steeper and steeper.

Years ago I was able to complete this climb less than 7 minutes. But since I had these sucky and uncomfortable shoes, it was taking me longer and I had to dismount so many times because my feet would get numb.

After 15 minutes, I finally get to the top of the climb. As I sat there resting, I hear some rustling in the nearby bushes. Then I hear a ROAR! HOLY SMOKES! A mountain lion comes out. But this was no ordinary lion; he was dressed up as a Ninja! Plus he was drinking what appeared to be a Venti Caramel Frappucino from Starbucks. He lets out another ROAR. I’m terrified! 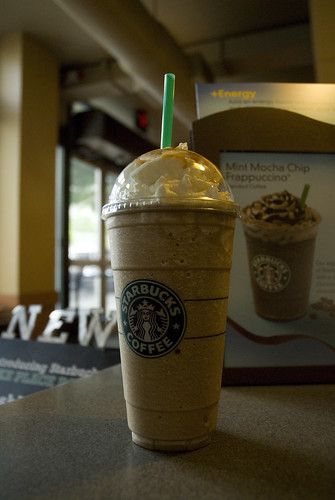 Then the Ninja Lion speaks! He says in a Mr. T voice. “Hey fOO! Why you wearin’ such sucky shoes!” I shrug my shoulders and try to hide my shoes because I’m embarrassed. He then says, “I pitty the fOO who wears sucky SHOES! Just fo’ dat, I’m gonna teach you a lesson BOY!”

I wasn’t sure what Ninja Lion meant by teaching me a lesson. I asked him to clarify. He says, “NO!” But instead he tells me that no man should be caught wearing dreadful shoes when mountain biking. I agree but he says we’re not friends because of my shoes.

He sips the last of his drink, and taking the straw to clean out the left over whip cream then takes the straw and places it in his mouth. Once he was done, he walked over to the trash can to deposit his cup in the receptacle. Ninja Lion then says, “Ok Sucka, I’m gonna kick yo’ butt for those dang ugly shoes!” He takes a fighting stance I figured I might as well fight since he can probably chase me down if I tried to run.

Luckily I took some lessons from Steven Seagal back in the early 90’s and learned some Aikido. I tell Ninja Lion that I know Aikido and he laughs…”Aikido is for Sissies!” Then next thing you know we’re brawling! A punch here, a kick there, and now we’re rolling on the ground! Ninja Lion then pins me down and he says, “You give up Sucka!?!” I tap out and asked him what he wanted. He replied, “I want yo’ shoes sucka! Those things are a disgrace to the man race!”

I oblige and remove my shoes. He takes them and throws them in the trash can. He then tells me,”Let this be a lesson to you! You need good shoes, and the kind you had didn’t cut it. Get some SERFAS SHOES! SUCKA!”

Ninja Lion walked away and disappeared into the bushes. I am left with no shoes and that’s why I need a new pair of Serfas shoes.

After a few hours I received an email from Serfas stating that they liked my story, laughed out loud and are in the process of sending me a pair of Serfas TRAX Shoes!

I’m so excited about my new shoes! I can’t wait to ride with them. To think that one of our readers said that he didn’t like my fictional stories because he wasn’t “poetic” enough to understand them…