This past weekend my friends and I headed up to Glendora Mountain Road aka GMR. We would be descending down a trail called Monroe Truck Trail or GMR East. There are several names for this trail but it’s commonly referred to just as “GMR”. I myself have been riding this trail several times the last two weeks, since my friend Perfecto showed it to me. It doesn’t seem to get old… It’s pretty hard to pass up a super fun descent that is SIX miles long. 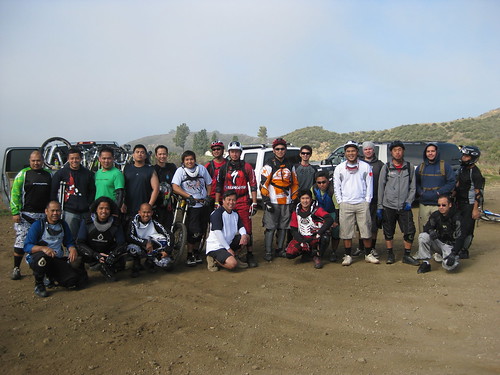 The way this works is we shuttle the riders to the top. We typically leave several cars at the bottom parking lot then drive up to the upper parking lot, next to the trailhead. The drive up is the only downside for this ride. If you easily get car sick / motion sickness, best to prep yourself as you will go up a winding road. GMR is also popular to many other users such as road cyclists, motorcyclists (fast guys who drag their knees on corners) and longboards (skateboards). The road can be busy so be careful. It’s about an 8 mile drive to the top. 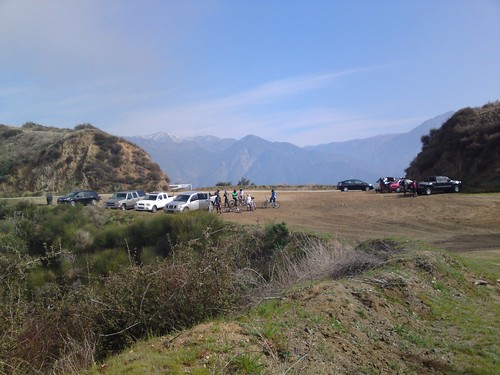 View from the trailhead. Pic by Nel Manimbo

Description of the trail – from the trailhead you will start on a descent. You will encounter a short climb, then the rest is all downhill. There is nothing technical with the trail, just a few exposures on the side of the mountain as you pick up speed. There will be short s-turns, switchbacks, loose rocks in some places, … but most of all FAST sections. If you are familiar with the Luge in Orange County, it’s similar but much longer. Talk about smiles for miles… (*There is an option off this trail for a more challenging downhill which has a real steep section). 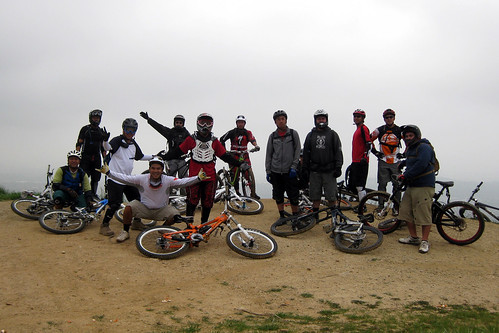 Area where we regroup

This group ride consisted of 21 guys. The plan was to do two runs. The first will be down the trail I described above and the second will be down GMR West, a two mile DH run. I myself haven’t been down GMR West and was looking forward to it. Heading down the mountain, the group split into two – 12 went with me down the route mentioned above and the other 9, Perfecto’s group, turned off at the *steep section. We stopped at the breakpoint to regroup. From here we would typically go down the switchbacks but decided to try a different route. It was supposed to be longer… little did we know what the bottom had in store for us. Water crossing after water crossing!!! 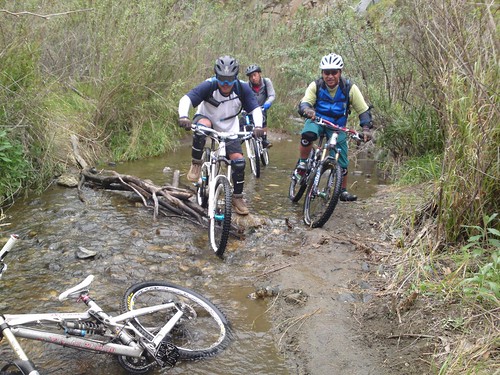 One of the many water crossings. pic by Nel Manimbo

Just when we thought we were out of it, there would be more… not only that, some sections were impossible to ride through as the shrubs were overgrown. Needless to say we had to hike-a-bike through some of it. When we finally made it out, we regrouped at the exit. 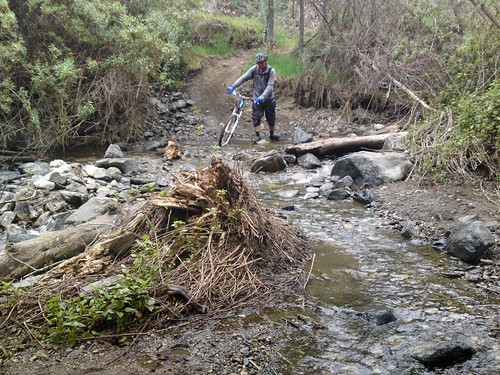 While waiting for the others to exit we noticed a FD helicopter flying overhead and fairly low. Uh oh… we had a feeling something happened. From here was a short ride to our cars that were left behind at the lower parking lot. When we got there, there were more FD and paramedics. We asked what was going on and all they can tell us is someone got hurt. Not knowing the details, we suspected it was someone from the other group that split off. There were no other mountain bikers on the trail except for us that morning. 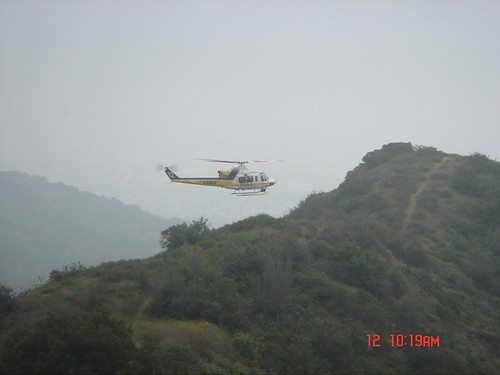 Landing somewhere up in the mountain. pic by Flex Jamboy

We waited at the bottom for awhile waiting for the other group to come down. When they didn’t, six of us went up for another run down the mountain. Reaching the breakpoint we see Perfecto’s group – one less rider, Jay. Apparently there was a mishap and Jay crashed down the mountain. I don’t have the details of his crash but it required him to be airlifted out of the mountain. Perf’s group, now one-less rider, were taking turns bring Jay’s bike down the mountain. 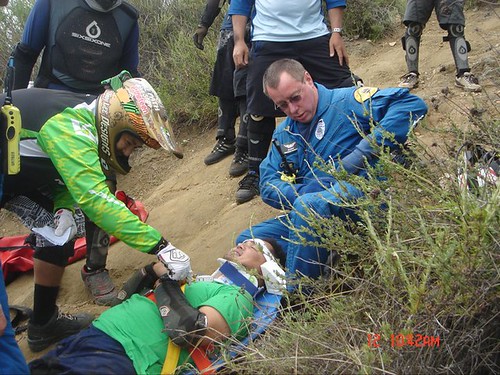 Securing Jay before the airlift. Pic by Flex Jamboy

My six guys finished the ride by heading down the switchbacks avoiding the previous water adventure. Almost at the bottom, our friend Dexter comes very close to rear ending Alan and had to veer off the trail. Fortunately there was a tree that kept him from going much further to the bottom of the mountain. We pulled him up and he walked away unscathed. Wow what an eventful ride!!! 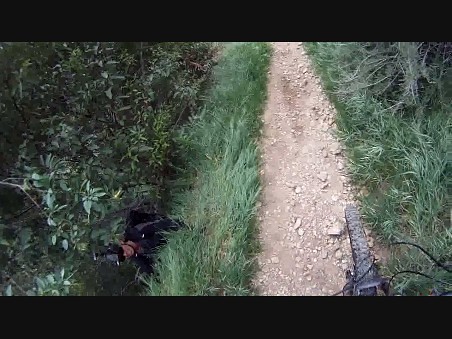 Jay went home from the hospital the same day. From the pictures and posts on FB, he appears to be ok. Below is a video from our last run… Rescue Dexter is at the end of the clip 🙂