Over the weekend I attended a local bicycle swap meet in hopes of landing a few deals. Last year prices were good, tons of vendor and tons of parts to be had. This year when I heard about the swap meet I was excited because I need to get some parts for my daughter’s bike as well as a few project bikes that I have going on. With cash in hand, Boo and I met up with some of the guys on the race team to see what kind of things we can get.

To my surprise, the vendor area was thin. In fact one of the main sellers packed up early (8am-ish) and left for the day. I perused the area about 4 times in hopes I could find something I need. As I saw certain parts, I’d ask the sellers how much the items were and shocked by the amount they told me. Wow, some of the USED items were close to retail! For example one seller had a SRAM 951 9 Speed chain (new) for $20, but you Google it and find that those chains can actually be bought as low as $15!

Great example of something used and way over priced. 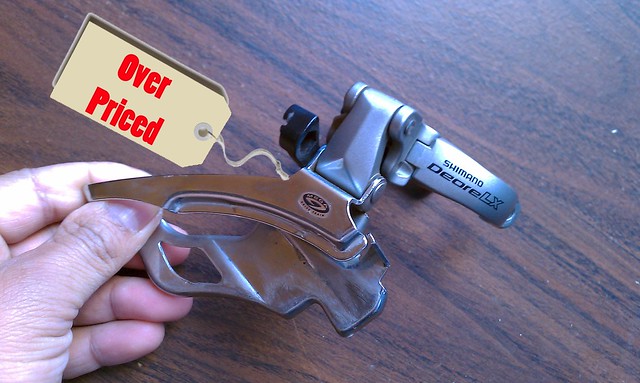 It was pretty much like that for most of these sellers. What bugs me is that people forget that this is a SWAP MEET, prices are usually low as in it’s a bargain..not retail! Heck if I wanted to pay retail, I would have gone to the LBS down the street! All I know is, the next time I set up at a swap meet to sell my stuff, I’m pricing things WAY BELOW what everyone else is selling their stuff for just to make sure I get the customers.