As you may have already read, the team did pretty well this past weekend. I wanted to fill in some gaps from our team’s performance as well as experiences during the races.

Saturday we were greeted with a sweet kiss from some rare SoCal rain. Rain here would be as rare as seeing a Vegan eat a large piece of London Broil. It just doesn’t happen…not too often. Anyhow, I quickly set up our camp and headed out to the DH course to get an idea on what kind of beating I’ll be getting the next day.

The XC race was planned to start at 10ish. One at a time the stars of the MtnBikeRiders race team arrived to the venue with their bikes in tow. Our XC athletes, Priscilla Policar, Eric Hunner, David Sanderson and staff writer, Jeremy Yang started warming up and psyching themselves out for the race. Donny Jackson, event organizer, lines up the races and dismisses them per category. What’s interesting to see is that the SS rider were released right after the Pros/Experts. Donny knows that SS riders are some of the fastest athletes in the race.

As I watched from the sidelines, I throw a few cheers and jabs at Eric and David such as joking with them by saying, “IF YOU DON’T COME BACK IN 1ST PLACE, DON’T COME BACK AT ALL!” All jokes aside, I noticed something interesting. I see how Eric changes from a very friendly and cordial guy to this very intense….Animal. Donny counts them down, 3,2,1. But at 2, Eric leans forward, his face becomes unrecognizable because now he’s in attack mode, then at 1, the SSers are off with an explosive start. Eric then lunges forward and he resembles a mountain lion that’s about to pounce on its prey. Eric positions himself as the #2 rider of the pack.

Not too far behind was his team mate, David Sanderson. We’ve often joked and called him a ninja because of how quick and quiet he is, which is combined with his lethal techniques. David is in the pack, but you can see him methodically plan out his game plan as he’s riding away. He quickly maneuvers himself through the other SS riders and quickly leaves behind another racer in his age group.

The SSers have two laps to ride, but I knew they’d be back in no time at all. I then turn my attention to my favorite racer of our team, Priscilla Policar. As I walk up, she’s talking to the other female riders and is quite friendly. It really is a nice thing to see her being social since the rest of the other racers were so focused and even cold to other riders in their category. 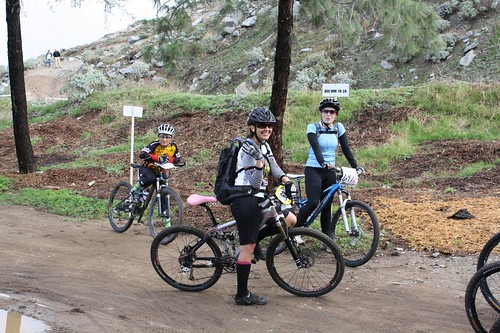 I also visit with Jeremy Yang who is racing in the 200 Club. I mess with him and at the same time I encourage the guy to ride well. Donny then comes to the last group which is the rest of the beginners, women and 200club. 3,2,1 and they’re all off to a great start. The beginners only have to do 1 lap that day. 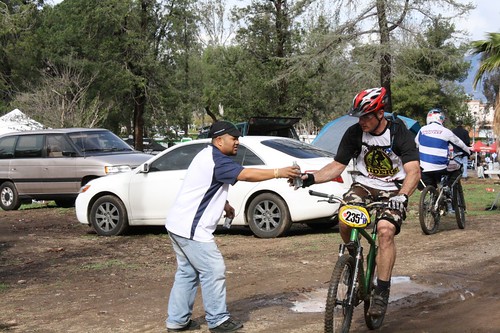 As I wave good bye and say my last words of encouragement. I run back to camp and g
et our Hammer Gels and water bottles ready. I also recruited my daughter to snap some shots for the site. While we wait, I hear the MC announce that the first XC riders are already coming in. I knew it was a matter of minutes before SS riders would be rolling through. I quickly see Eric and I yell to him and ask him what he needs, water or gel. He yells back and I quickly get him a bottle of water. Hand off was a success. A few minutes later David comes in, and wanted water too. Hand off was pretty good. I was able to give him gel and water at the same time…cool eh. But then he quickly drops the gel since he didn’t need it.

I knew that once they passed by, I had to get set up to take photos at the finish line for the beginners to come in. Jeremy Yang comes in with a smile on his face and a few minutes later we see Priscilla Policar. Not long after them Eric, then David roll through the finish line. We’re hoot’n and hollering as well as throwing up a few high fives to the team members and making sure they received pats on the back as well as other words of encouragement.

Look how big Eric is compared to the other SSers… 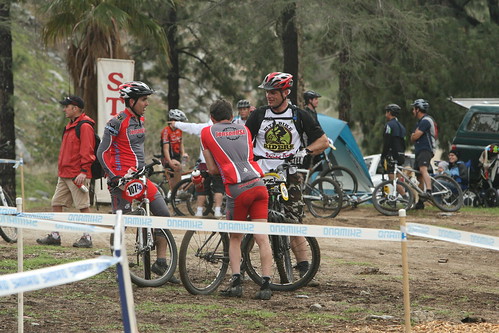 Not long after the race, the results were posted. Eric comes in at 2nd, David 3rd, Priscilla 2nd and Jeremy in 4th. Pretty impressive if you ask me. As a manager, I get the warm and fuzzies seeing our team do so well and its magnified while they are standing on the podium. 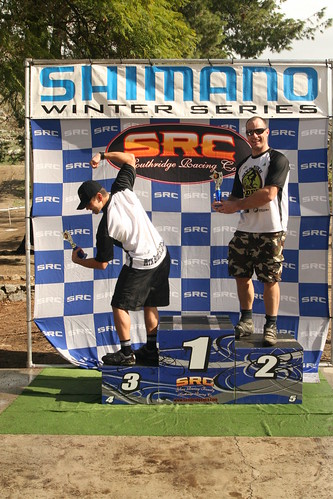 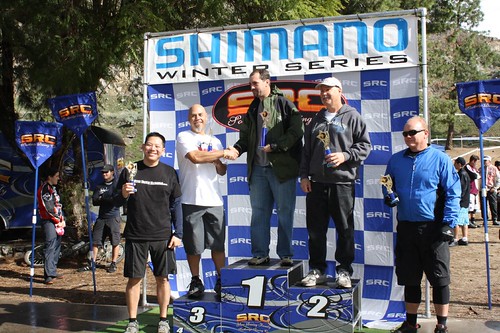 SuperD came around rather quickly. Kim, Moe and Joe mount up and they are racing against time and against the weather. It wasn’t raining when they were lining up, but by the time they crossed the finish line, it was pouring. All 3 racers performed with great heart and it showed in the results. Moe in 7th, Joe in 5th and Kim, as always in 1st.

Downhill was a challenge in its own right. We’ve mentioned how the rain did a number on the course, causing it to be slippery and muddy. If I’m not mistaken, this was the first dh race we’ve raced in the rain. Without having to repeat the race reports, here were the results. The Wizard, Tony Finch came in 4th, Kim 1st, RL 3rd, Joe 5th and Moe 6th. Again, warm and fuzzies all around as the the team does a great job in representing as well as riding. 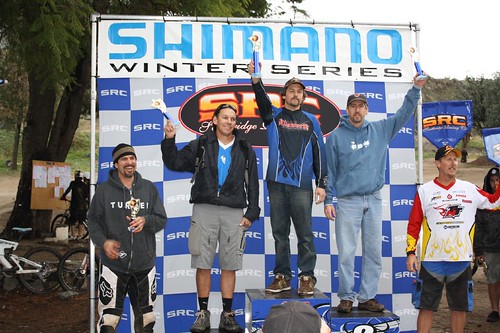 I forgot to mention that we treated our racers to a great BBQ on Saturday by providing some awesome Carne Asada. It was our way of making sure they were taken care of. I do appreciate each of the racers that participated as well as our sponsors for supporting our team. We can’t forget about our spouses and kids who understand that we want to race and allow us to do so. Thanks! 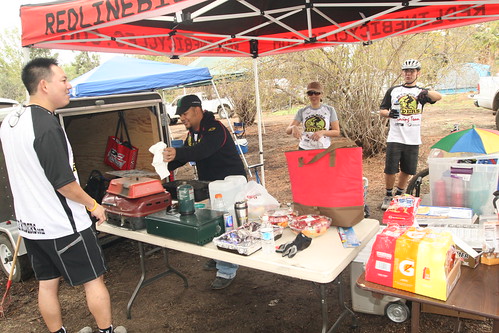 Spring is pretty much here in SoCal.