I did it. I jumped on the single speed bandwagon. I suppose it was just a matter of time really…with all these boys around me on their single speeds. I swore I’d never do it. But I really just couldn’t resist. I was blown away when I first saw RL riding his single speed. The guy actually rode faster on a single speed then he does with gears!

Most recently Jeremy built up his single speed and before that I saw David decide to give it a go. Now he is racing ss! I just didn’t understand what all this excitement was about? Why the self-torture? I like all my gears, especially my granny gear as needed. RL has been trying to get me on a single speed for a long time now. I really just had no desire but my curiosity peeked and I said to RL “Well maybe I’ll just give your single speed a try one of these days – but no strings attached! If I don’t like it I don’t want you to ask again.” That’s all he needed. He had me out on the fully loop in a matter of days on his single speed. 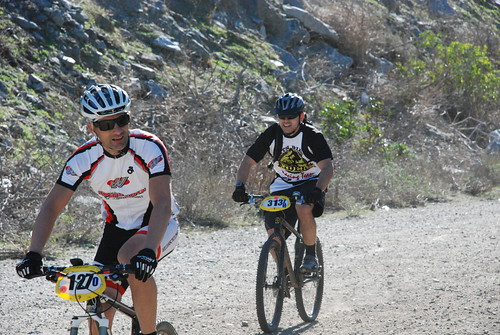 I really didn’t know what to think of it initially. The bike was all wrong of course for my body but I kept this in mind as we put in a few miles on it. I felt very frustrated with not being able to climb a few hills but the flats were fun. I felt like a hamster turning in her wheel at times and other times the pedal stroke was effortless, yet I moved so fast!

So after a couple of runs RL suggested building up my beloved Motobecane as a ss for me. The chance to saddle up on the Motobecane again??? Yes! And the best part was I got to pick the color of my chain! How COOL is that?!?!?! My KHS is decked out in pink so I thought purple would be a nice change. I’m all about comfort so we threw on my Ergon grips and a nicer saddle. We thought it best to stick to a 32-18 for now. 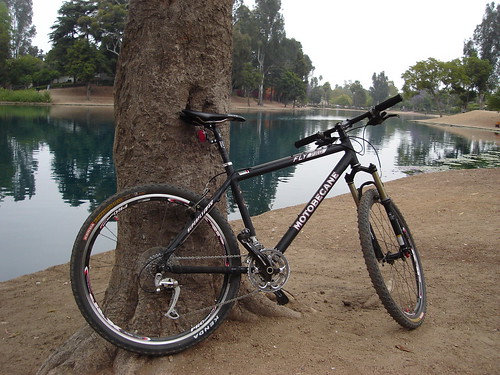 My sweet Motobecane…..before the transformation

I have been secretly riding the single speed for about 4 weeks now. Why secret you ask??? Well first off, I didn’t want the boys to know in case I completely hated it and gave up after 1 ride. lol. It’s also really embarrassing not to be able to clear some of the hills out there – yes I have got a little pride. Oh c’mon you know we all feel a little bad sometimes when we have to dismount. I know I am not the only one. But I am over it, because I still can’t clear some of those hills! lol.

This past weekend was my first “group” ride on the single speed out at Sycamore Canyon (ride report to follow). I don’t know WHO said this trail was single speed friendly (RANDALL), but in any case I survived. LOL. We got in a little over 15 miles and I am happy to say I still like it. I love that there is so little to think about on a single speed. I don’t have to give any forethought to which gear I want to be in, I just have to adjust my pedal stroke. The boys thought I was showing off when I was zippin up the hills but, really, I just need A LOT of momentum to get up. I still find the short steep climbs very difficult, which is a blow to my ego..lol….but I hope in time I’ll build up my muscles to clear these. There is also something familiar about the set up. It feels very similar to my spin bike, which I am on about twice a week. It’s really hard to describe the enjoyment I feel on that bike. Maybe it’s becuase it’s a new experience? Maybe I like the extra power I feel in my pedal stroke? Or maybe I just am happy to be reunited with my moto. I don’t know what it is, but I like it. 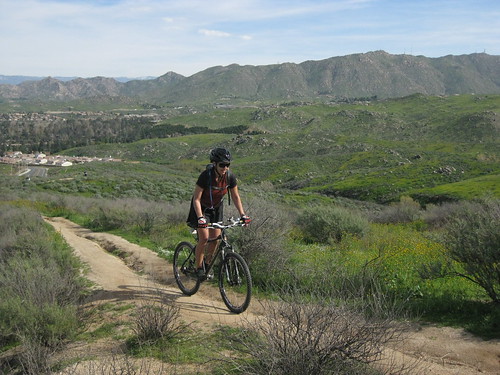 Me and my SS Moto

The single speed set up is also an incredible work out. I’m not just talking about my legs either. My arms and shoulders are still talking about it a day later! Maybe riding single speed will make me more fit?? Maybe that’s the animals secret?!?!? Well I’ll let you know in time! Ha! I am also curious to know if it will improve my riding on my geared bike? 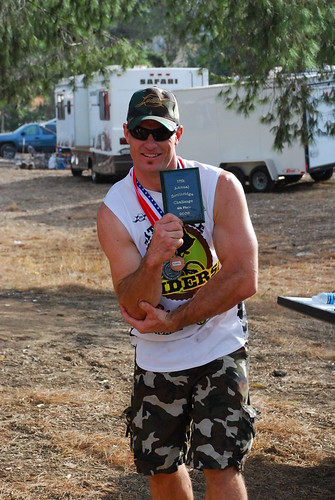 So in case you have been mulling over a single speed set up – give it a go. I don’t think you’ll be disappointed. Ask any of the boys. They’ll be the first to let you know I really had no desire to ever ride single speed. I viewed it as a form of masochism! There are some aspects that are difficult but I have come to appreciate the hard work. And the rides have been fun. As painful as some of the ride was this past weekend, I really had a great time and I was proud that I did it on the single speed out there. 🙂 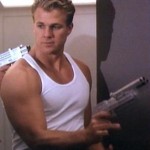 You know you want one…

5 thoughts on “The Single Speed Bandwagon”