For the past month or so, my daughter and I have been riding our tandem. You may have seen this machine used in a previous mountain bike race that Cousin Joe and I participated in back in the fall of 2010. It actually took quite a bit of convincing and bribery to get my daughter to agree to ride the tandem on dirt. At first she said she’ll only try it if we were on the streets. Then one day I asked her if she’d like to ride parts of the Fullerton Loop. To my surprise she said yes. But our agreed first time out didn’t happen due to the rain. She then kept asking me for days about riding once the rain had cleared up.

So now we’re in the month of May, we had actually been riding tandem since April. Our adventures have included other trails like Aliso Woods and Whiting Ranch. Both of those places can be challenging on a regular mountain bike, even more so with a tandem. Aleah actually learned pretty quick on how to handle the tandem. I call out commands and she responds. For example, if I say BUMP, that means I stop pedaling and she gets off the saddle and tries to get behind it as far as she can with her elbows out. PEDAL means, she sits back down to pedal. PUSH means to work hard especially up a tough climb. 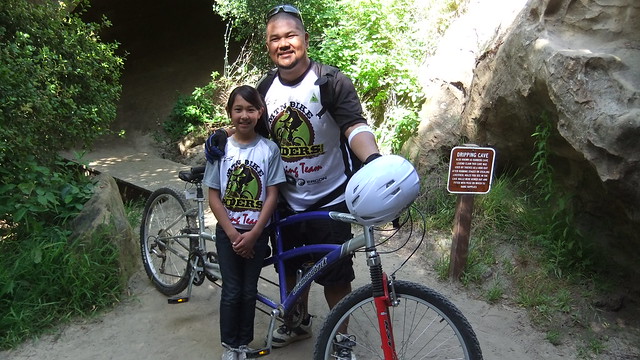 Now that you know all about how our tandem adventures got started and how it works, let me explain how I’ve used it as a training tool for an upcoming downhill race. For the past month or so, I’ve rarely ridden my regular mountain bike for any riding. I’ve spent almost every weekend as well as our week day ride on the tandem. Heck my daughter and I even rode the Ride of Silence just the other night on the tandem. What I love about riding the tandem, well for one, I get to spend time with my daughter. 2, I get to become a stronger rider because of the added weight of a Stoker and the bigger bike.

Aleah loves to ride the tandem, in fact its what she looks forward to on the weekends and during the week. My bike handling skills have actually gotten better. Having to balance the two of us and maneuver through some tough trails can become a major work out. As I am typing this, I can feel my upper body’s soreness about to set in from the ride we finished a few hours ago.

My hope is that when it comes to race time, my legs and lungs are stronger this time around because of all the tandem time that I’ve experienced.

Pricepoint.com is having a sale!