Check it out ganstas, our friend Joe Kidd who is a smart young man showed up to the trail with his homemade HID bicycle light. 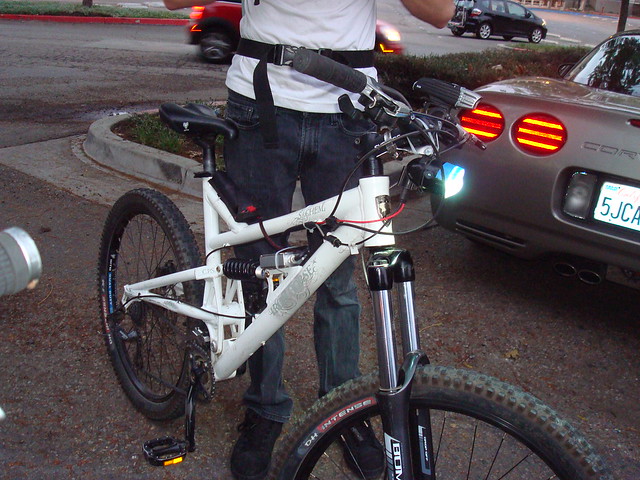 Yes you read it right, HID as in “high intensity discharge”

Some basic info on Joe Kidd’s light. It uses a projector headlight from a car. The HID (high intensity discharge) light bulb and ballast was from a standard off the shelf aftermarket kit. Team Rider, and Joe Kidd’s co-worker, Nick DiBlasi said that you can get it on eBay, Amazon, or off a factory hid car from the junk yard (much like how Joe Kidd did).

The battery pack he used was a 2200 mAh RC car battery that is 12 volt to match the required 12 volt lighting system. But based on Nick D’s arithmetic skills, it uses roughly 100mAh worth on juice every minute. He estimates the output of the light around 3000 lumens…yes THREE THOUSAND LUMENS!

Nick D claims that the “coolest thing about HID lights is that you can get different frequencies of light bulbs. Joe Kidd’s light was most likely in the 4300-6000 temperature range producing a white light. If you go lower in the range you get a more red orange color and if you go above that range it becomes more blue/ purple. Hence why you see some fixed up Hondas with dumb purple headlights. The most affective range for seeing is 4300-5000.”

If someone were to build one of these, both Nick D and Joe Kidd suggested that they should want to look for the lowest wattage version, so they could get he most time out of their battery. That combined with a larger 6000mAh + rc car battery would give you 60-75 min of run time. Only disadvantage being overall weight.

Considering that Joe Kidd agreed to go night riding with us without any lights, and for him to build his HID bicycle light at the last minute was extremely resourceful and Joe Kidd is only 20, he is on he right path.