MtnBikeRiders.com has been known for its many bike builds and projects. The newest one to hit the work stand is my very own project. You all may remember my Woodstock 707 frame that I stripped down to the bare metal. I was going to polish this thing until it was a mirror finish…but I didn’t have the patience to do so. I basically left it the way you see it. 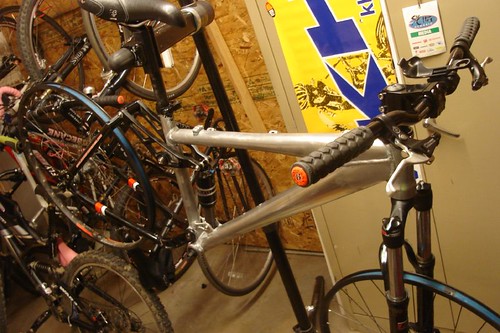 So what’s this new project that I’m cooking up? Well originally I wanted to build a single speed bike. Some of the fittest people on the trails I see these days are guys that ride single speed bikes. I had all the parts for it, well almost, but we’ll get to that later. I thought about using an old steel or aluminum frame I had. But after talking to Khoa, he told me that MB Action magazine recently built up a Full Suspension and they made it work!

The problem that I hear the most about FS/SS bikes would be the chain. Some say that it wouldn’t work because of how the suspension compresses and the chain tension and all that jazz. So I asked for the help of some of my bestest buds in the business. I called Scott Finch of RPM Cyclery and he was familiar with that article that Khoa mentioned and said that as long as I had constant tension on the chain that it would work. My buddy Vince Rodarte of KHS Bicycles said the same thing, I also called Jax Bicycles of Fullerton, Nathan Burke reiterated what the other fellas mentioned.

Then there was our very own Jack “Ghost Rider” Sweeney. He directed me to a company called YESS Pro. They actually make a chain tensioner for Full Suspension Single Speed Bikes!

I was going to use some old cassette spacers and an old 17t cog for the rear wheel, but I quickly found out that the spacers had these little keys that needed to be flushed mounted onto the rest of the cogs in the cassette. That basically meant that this idea was shot. So that led me to the Pricepoint.com Single Speed Conversion Kit. This thing priced around $13!

Yess had already said they are going to send me the tensioner. I’m working with Pricepoint.com to see about getting the Sette Conversion kit sent to me as well. Other than those two parts, the bike is about 80% complete.

I’ll keep you all posted with any updates I may have.