My day started at 5am.  Excited and couldn’t quite sleep, I tossed and turned in bed.  Around this time I received a text message from RL.  Apparently he couldn’t sleep either and was surprised when I returned his text message.  I started getting ready, getting my things together.  Approximately an hour and a half later, I received another text.  This time it was from Val and he says he’s outside my house waiting for me.  I was confused as I thought we were going to meet at 7:30am.  Then it dawned on me that Val forgot to turn his time back one hour… After clarifying the time, Val decided not to wait for me and he headed straight to Mt. SAC where we later met with everyone.  On our way to Mt. SAC it started raining.  Nothing heavy, but steady enough to wet the trails.

After I picked up my pre-registration packet I ran into a fellow clyde.  He informs me that we are now doing 3 LAPS instead of 2 (18 miles instead of 12) – Whaattt??? This was reminiscent to my race at Sea Otter earlier this year where there was a big confusion.

I was game for the 18 miles however I was a little worried that I may cramp up.  At the line up we were joined by other Sport classes and their respective age group. 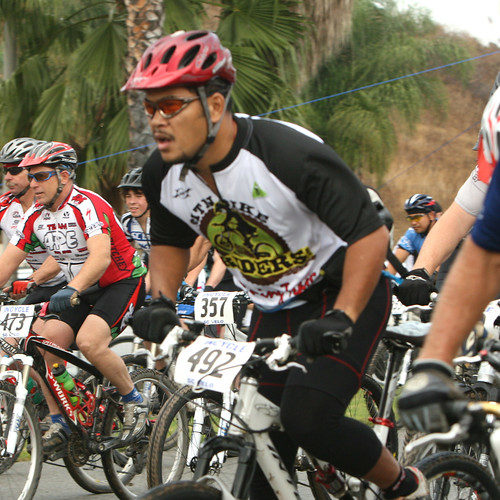 When we were given the GO, we sprinted on the asphalt for at least 100 yards towards the dirt, then through a narrow right-handed pathway.  At this point is where the bottleneck starts.  Racers from other Sport class tried to maneuver through this section.  As it turned into a straight away, the first climb was upon us.  I decided to stay in the inside lane.  Sprinting from the flats into the climb, I was in a high gear.  With much traffic upon me, I couldn’t switch into a low gear fast enough while trying to avoid running into other riders.  I got off my bike… Ughhh!  As the hill flattened a bit, I mounted my bike then tried to chase the pack.  I was disappointed as I rode through this section on our Pre-Ride. 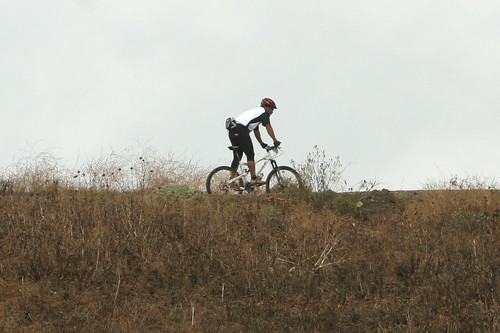 Reaching the first singletrack didn’t get any better.  Here the riders were lined up back-to-back and appeared like a centipede from a distance.  High-low, high-low (gears that is)… That’s how it felt like as we would stop and go.  The trail was slippery due to the rain earlier in the morning and light sprinkle was still upon us.  Some riders up ahead would either get stuck or hi-side the embankment.  If one person falters, the rest behind him/her will suffer.  My time in this section would seem like an eternity as I waited for riders to make it through. The rest of the race was a chase as I knew I was behind.

Approximately 3 miles in on my 2nd lap, I see several Clydes up ahead.  I knew they were in my class as their legs were marked with #31.  I stayed behind them for several more miles then eventually passed them by the farm.  Completing my 2nd lap, I spotted another Clyde up ahead.  I would stay behind him until the climb after the Feed Zone.  Here I would pass him and never see him throughout the rest of the race.  Despite the slippery sections and the change of distance, I finished the race without any mishaps or cramps.  The course was exactly like last year’s, which helped tremendously. 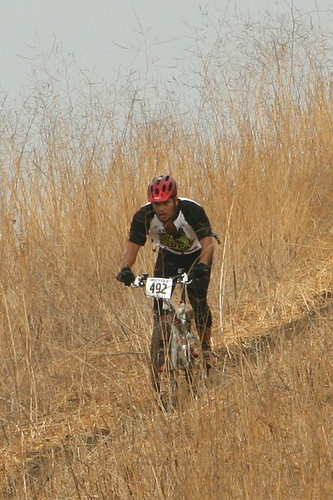 Sometime after I finished my race, I was at the Team Tent hanging out with family and friends.  I can hear on the loud speaker saying something about a protest.  Unbeknownst to me, it was for my class the Clydes.  Apparently there was confusion with the finishing times where some guys were listed higher than others on the results board.  After seeing for myself, the results had me listed at 11th place out of 12 racers.  Had I heard the announcement clearly, I would have protested.  As I stated above, on my 2nd lap I passed a group of Clydes, at least four in total.  Their legs were clearly marked with our # 31.  I was disappointed with my placement but even if I protested I doubt if I would have placed.

I was contemplating whether I should make mention of this incident however this is the second time this has happened to me.  Big or small, these events have to be better organized and refrain from making impromptu decisions that alter what the racers have signed up for.  This causes confusion amongst the racers and takes the fun out of the event.

This was the first time I was classified as a Sport.  I had to ride more miles, but I definitely had a lot of fun!

Onto Fontana for the last leg of the Triple Crown Challenge.