To say that I was anxious about this race is an understatement. This past month since the Bonelli race has been spent trying to get over soar throats and runny noses. I have been sick for four weeks now which has left me with very little riding time and training. Lucky for me I paid for this race a month ago so as much as I wanted to back out of the race I just couldn’t stand the thought of throwing away 35 bucks!

When I woke up that Sunday morning to rain clouds and sore legs I wasn’t feeling too good about the race. Sore legs you ask? Yeah, sore legs. In an attempt to avoid burning out my legs the day before on the pre-ride, I opted to hike a bike up a few hills. Well, in an attempt to “save” my legs I made it worse because I used different muscles to hike up those hills. My legs were hurting that morning.

Anyways, we headed out early that Sunday morning because we wanted to make sure we were there to encourage Joe and Eric since they had an earlier start then the rest of us. It sure does make a difference to hear the encouragement out there during the race so we wanted to make sure the boys got some much deserved team love out there. And I was glad we were able to get there and set up. It gave me a chance to relax with the children and help with pictures. 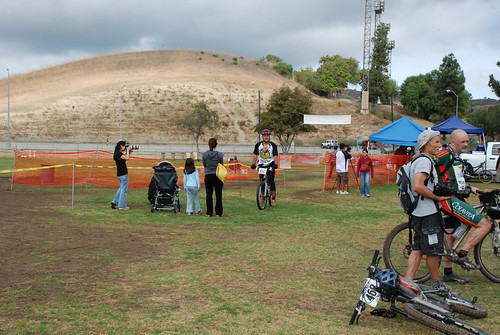 I was also relieved when Kim shared some of her anti-lactic acid build up pills with me. Not sure what they were called but I am buying a case of them! They really helped with my legs. I also popped a couple of FRS chews. These were great. No nausea and I felt like I was able to keep up my energy during the whole race.

At some point that morning I surrendered to just having a good time out there. I didn’t feel too confident about making podium becuase of my cold but I really just wanted to have fun. I decided I would just pace myself and ride my ride. 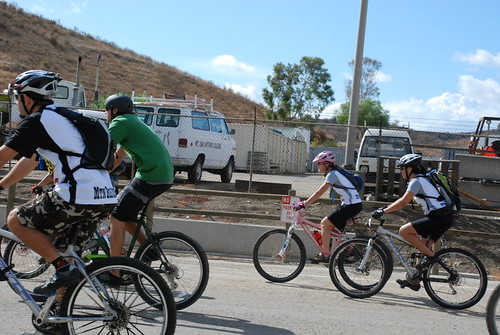 And enjoy the ride I did! The race had a good number of participants. About 6 women in my category (34 and Under) and 7 in Kim’s category (35 and Up), amongst 100 other men. I felt like I had a strong start, the only drawback is probably our positioning in the crowd. I think starting with the head of the pack would have given us more of an advantage. There was a single track portion of the ride early in the race where everyone just bottlenecks and comes to a dead stop. So for those of us who got a later start it really cost us some time. There was a great climb though soon after that was able to give a few of us the opportunity to make up time up the hill. It was shortly after this climb that I was able to catch up the the 2nd place rider in my category and haul butt to get past her.

I really enjoyed this race. I had a good energy and a good vibe for most of the race. It was super encouraging to see the mtnbikerider crew spread out throughout the course. Sometimes I spotted Joe or Jon out there snappin away with their cameras and offering words of encouragement. RL really went out of his way to make sure we were takin care of too. He even tumbled up a hill for me to make sure I got my sugar blocks. 🙂 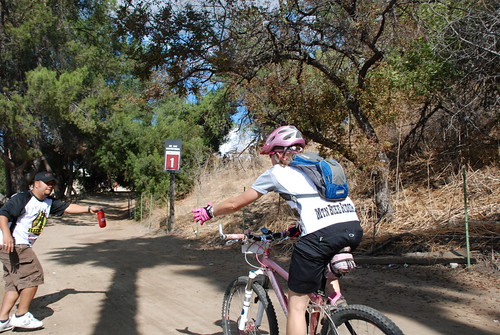 I really felt like this was one of my strongest races. It felt great to catch up to one guy right after the other and pass him! Hehehe. I of course offered my words of encouragement as I rode on by. 🙂 I made sure to take advantage of every portion of the trail that I could hammer it and every opportunity to rest on the fun downhills. I was hootin and hollering all the way down the hillsides! I had such a great time out there and it really seemed to go by faster then I had expected. I also want to mention a couple of us were able to throw on our new Ergon grips! Love these. If you haven’t tried these out yet – DO IT! I don’t know how I ever got by without them! I also rode with my new
pack. Great stuff.

At the last hill I actually caught up with Nehr who was nursing some bad cramps. I offered some more words of encouragement after I pulled some souvenirs out of my derailleur hanger and rode on down the hillside as fast as I could to land me a 2nd place win. 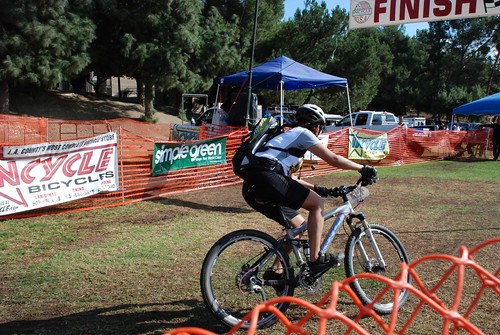 Comin in for the finish!

I was really proud of the team. Kim put some hurt on those girls with holding strong during the race. And the boys did an awesome job. Eric and Joe – those guys are animals! I don’t know how they rode 3 laps!! Crazy!!! And so proud of Moe, Nehr and Val for finishing the race! Way to go guys. I think Nehr has a promising future as a racer! 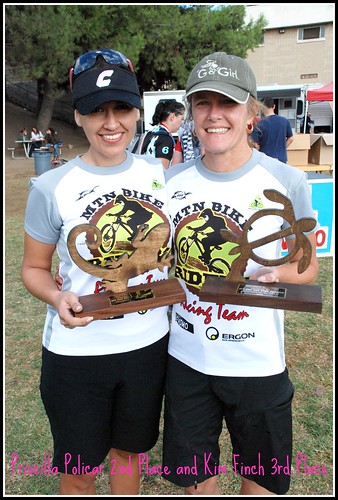 The girlz rocked it!

It was just a lot of fun hanging with the crew and the kiddos too. Good eats, good ride, good “refreshments” (thanks Eric!), and good friends! Now on to Fontucky!!! Woo hoo!

And a special thanks again to KHS (for my frame), ERGON, EVOMO, HOSS, and BikeCommuters of course!