As you all know, members of the race team have kicked butt all winter long! We started racing in Fall of 08 and started the Shimano Winter Series on January 5th,2009. Since then we’ve basically had a race weekend every two weeks until the end on March 22nd, 2009.

Our team consisted of our core crew of Priscilla Policar (XC), Kim Finch, (XC, Super D and DH), David Sanderson (Single Speed XC), Eric “The Animal” Hunner (Single Speed XC), Tony Finch (DH and Super D) and Joe Solancho (XC, Super D, DH). Then there is Moe Ramirez and yours truly, RL Policar. Moe tried his hand in XC racing in 08 then decided to race Super D and DH for 09. I raced my first DH event in 08 and continued to race for 09.

Before I go on, I’d first like to thank our sponsors, BikeCommuters.com, Evomo Clothing, Hoss MTB, and Ergon USA. These companies have supported our team since the beginning and truly deserve some love. So do us a favor, click on the links, buy their stuff, why? Well honestly, its because their products rock! Evomo has some sweet mountain bike related clothing and jerseys, Hoss MTB makes some of the best riding clothing such as shorts, and jerseys. Ergon Bike…need I say more? Ergon makes super comfortable hydration packs and their world famous grips will literally change your riding…trust us!

One of the things I’ve often mentioned to the team and on the website is our chemistry. Not only do we all get along, but we actually like spending time with one another. In fact, on my birthday, almost all of the team showed up for the surprise celebration that Priscilla set up. I also have to mention that we all chip in with the responsibility of each race. Usually we would have a BBQ or some sort of potluck and we could easily rely on the team to bring what was needed or what ever they promised to bring.

Encouragement was also key to the success of our team. We cheered each other on during the races and while some of us were on the podium. One of my favorite things to do was to keep tabs of riders in each of their respective categories. So that meant I would keep a tab on the riders in Eric and David’s SS group, and as they passed by the feed station, I’d give them an update on how each rider was from them. After the races, our team would do so well, that they would often times get the opportunity to stand on the podium. This is when more cheers and praise from the team would come out in support of our rider. I think we were one of the loudest groups during the awards… 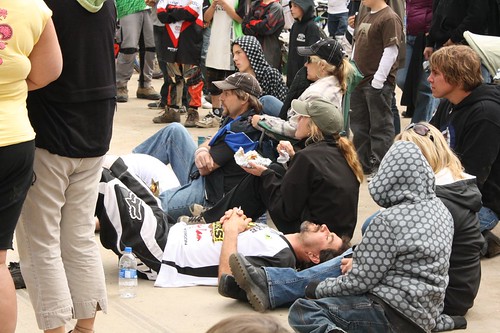 Our mechanical support system has been amazing. Tony Finch was our roving bike shop. He had just about any part you needed in his car. Plus if we needed advice about our bike, tire pressure or the terrain, Tony was the man to go to. With his years of racing and riding, Tony was like the living/biking Wikipedia for bikes. 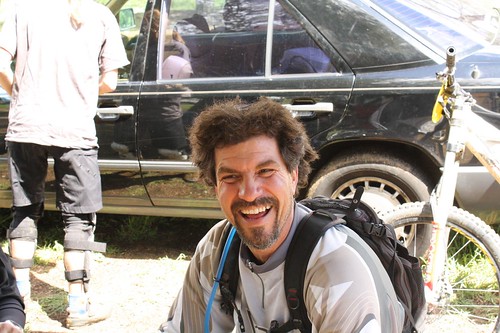 As we raced through out the months, there were times when we all felt like the races had started taking a toll on all of us. It’s not exactly easy to race every other weekend. Some of us live far, have kids and the preparation as well as the effort to get to each race can be taxing after a few months. But I have to tell you, once we got on our bikes…all that seemed to not matter. We were all doing something we loved…riding bikes! 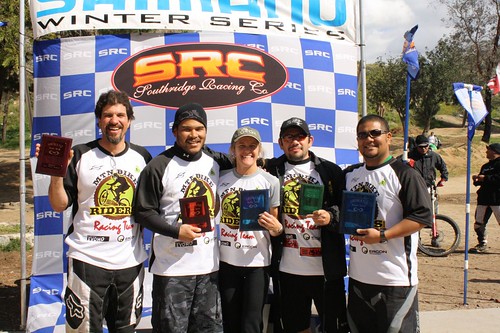 All in all, our team performed really well at Fontana. We took home a few championships and it also cultivated something much more out of each of us. I think if anything, I saw each rider push through some tough times on the trail as well as in our own lives.

I can’t really get into details, but some of our team members had gone through quite a bit during the series, yet they persevered and kept coming back. I tell you, our team is great. I actually look forward to seeing all the guys and gals. There’s just something about seeing Eric’s strength come into play whether off or on the trail. David’s enthusiasm was infectious, Joe’s photos and heart to race has been pretty awesome. Tony Finch’s knowledge and fatherly qualities was great to see because he really made sure he coached all of us newbies. Kim’s tenacity was very impressive. In fact Moe often viewed Kim as his racing role model. Then there’s Priscilla, she has been very supportive during the series. Not only was she out there giving her best, but she was there to support the rest of us during our own races. 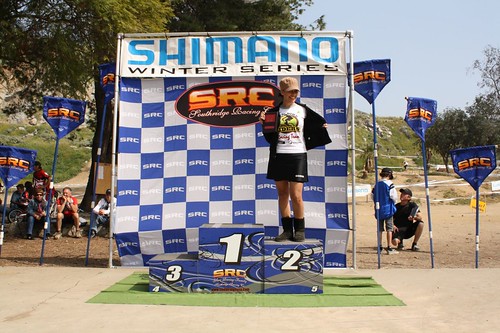 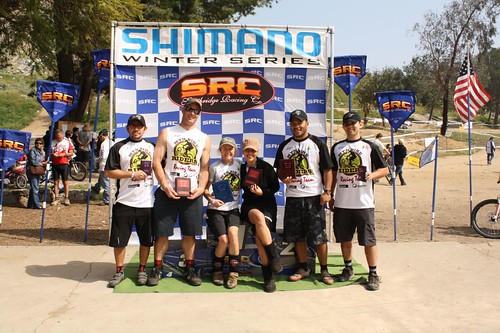 I also want to take the time to say how proud I am of my buddy Moe. For this guy to race downhill is nothing but impressive. I’m not saying he rides like Eric Carter, but the guy is out there giving his best. Each race Moe isn’t holding back, he literally gives DH 100% of his heart and doesn’t stop working hard until he crosses the finish line. 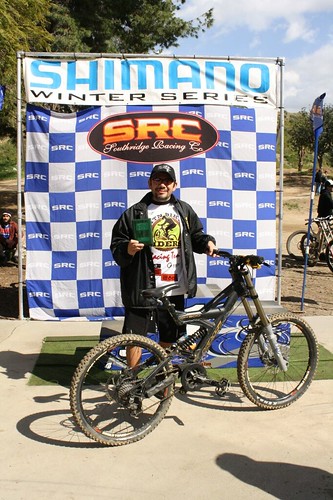 Though the Winter Series is over, it doesn’t mean we’re done racing. There are a few more events this year and I am just as excited as everyone else to get back on the bike and compete. Besides, we get to hang out with each other again!

So I hope you’ve enjoyed our racing adventures through videos and race reports. We certainly have. I know that racing has brought something new and different to the site’s content. If anything, many bike companies we deal with are really happy to see us out there racin’ and having fun. How do we know this? Well…some of then will either tell us during the events, or we’ll get emails stating they love what we’ve been doing. Don’t worry, we’re still the same set of people that do reviews, articles and all that jazz.

Thanks again to our readers for choosing to visit MtnBikeRiders.com and for your continued support in what we do.