Two weeks ago, RL and I raced at the Mt. SAC Fat Tire Classic on a tandem bike. What was interesting about this race is we were the only ones in our CAT with a tandem bike. Traditionally Mt SAC has had a class for tandems however since they are now aligning with the other races of the Triple Crown, they did away with the tandem class. Without knowing this, RL purchased a used tandem bike just a few weeks before the race. In total we had a whopping ONE ride to practice which was just a few days prior to the race.

Unsure if we were even allowed to race the tandem, RL and I fired off several emails to the powers that be at Mt SAC. Closer to the race day we received a response that we can however we’ll have to race in our age group. Being that RL registered us, we raced in this group which was Beginners 27-34… bunch of fast-er guys.

At the line-up we were greeted with cheers from both racers and spectators. Many of our friends from the racing circuit cheered us onto the starting line! Man, we were like mountain biking celebrities!!! :). Not wanting to impede the other racers in our CAT, we lined up in the back. Off the bat we knew what our chances were, we didn’t have high expectations on placing. Our goal was NOT to finish last! 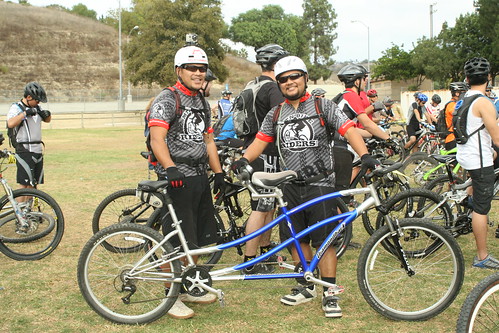 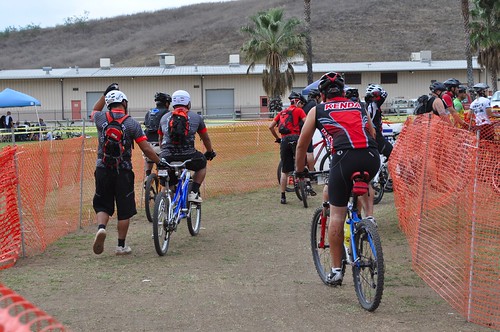 RL and I walking our bike towards the back of the pack.
Below is a video from the Stoker’s POV. You’ll see us doing really well in the first lap. As a matter of fact we passed or kept up with many racers on the flats. Up the first hill wasn’t bad, we made it up with out any problems. Approaching the switchback climbs we started encountering problems within the singletrack. We had a hard time maneuvering through this. On the other side of the switchbacks I got off the bike and ran to the bottom where it flattened. You’ll see me in the video (fast forwarded) running through the trail waiting for RL at the bottom. I’m glad we didn’t ride through here as there were at least three different people that went down. RL however managed to ride through here smoothly. 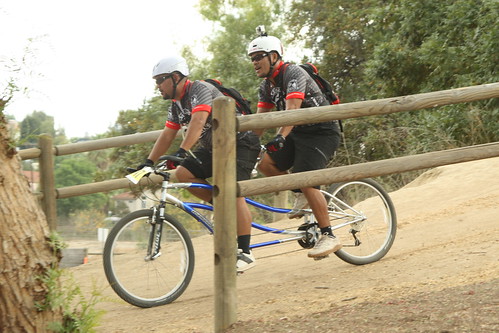 Onto the third hill we grinded – Energy level was still good…. At the bottom on the other side, we were cheered on by our families and friends. Shortly after this descent we made our way towards probably the third toughest climb. Fortunately the switchbacks were fire-road wide. Mash, mash, mash – we made it up! All through out the Captain and the Stoker are in constant communication. 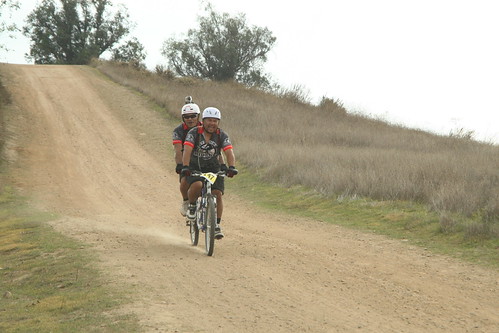 Much of the same for the second lap however fatigue kicked in and we were a lot slower. Even walking up some of the hills were harder second time around :(. Somewhere in between the second lap, as we grinded through, we became more aware of our placement within the race. Our goal was not to be last however, we were seeing less and less racers… only a few passed us on the last climb by the stables. Could we have been that far behind??? Apparently not… RL and I continued to pedal, descended the big (last) downhill section with more confidence than the first lap. 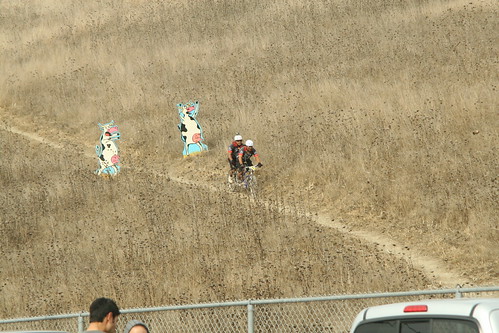 As we motored through the Finish Line we were greeted by the same cheers that were there at the Start. Shortly after, another racer in our CAT came in. We did it – we were not last!!!. Out of 25, we were the 24th 🙂 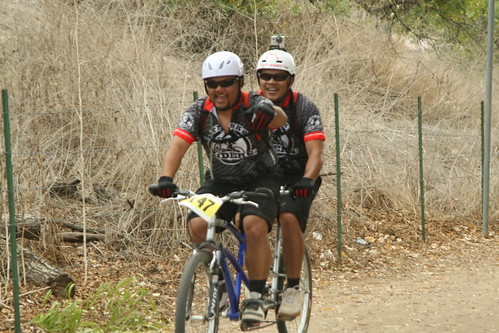 What a great experience. It was my first ever tandem race and it was such a blast!!! I’m hoping they will open this Class next year in the Triple Crown series as we are looking forward to racing it again, with even more training!

5 Replies to “The Man in the Rear – Tandem Mt. SAC Race report”