I know I know, some of you are thinking that this isn’t possible. But you know what, it’s happened to me more than a few times. In fact just last year I felt it from May until September. It’s this overwhelming feeling of just not wanting to ride, or lack of motivation to get on the bike. What’s trippy about this whole experience is that you feel weird because you shouldn’t be having these funky feelings of not wanting to ride because riding is something you just love with…or at least you used to.

In years past, I’ve tried mixing up where I ride, who I ride with or what time I ride. But you know what, all that did was make me not want to ride. But here’s some stuff that did work for me, perhaps it will help you.

1. Change things up with your bike. One thing I found that keeps me excited about riding is changing things up on my bikes. Take for example Burt Reynolds. This started off as a Redline D600. Very basic, entry-level 29er. I first gave the bike the moniker of Burt Reynolds due to the color scheme of the bike, black, gold and grey. It reminded me of the Bandit in the movie Smokey and the Bandit. I started this on-going project with Burt Reynolds back in December and now it’s May and I’m still changing things up on him. He’s gone from the 24speed that weighed over 32lbs to a 26lbs rigid, single speed, then to a 27 speed rigid, then new carbon bars, then wider aluminum bars, then M-Bars, then a suspension fork, then a 2×10, then most recently, new-to-Burt wheelset, tires, handle bar and stem. Oh and I can’t forget his newest bling, a gold Chris King headset, to match the small gold pin striping on the frame. During all these changes, I had even considered powder coating him pink, but decided against it because I like the idea that Burt Reynolds is a boy bike and felt weird changing him to a girl bike.

2. Timing. Try riding as fast as you can on the trail you most frequent. Set up a route that you could see what your best time would be. Use mobile apps like MapyMyRide, Strava and others to see how you rank against other people who ride the same trail. I know that 2 of my friends compete with each other on Strava, but neither of them know this. I figured it out when I visited each of them at different occasions. Friend 1 said that he noticed Friend 2 was making some progress on Strava. But wanted to make sure that Friend 2 wasn’t going to beat his mileage and times on the trails. When I visited Friend 2, he mentioned that Friend 1 was gaining up on his Strava results and assured me that the long 25 mile ride he had planned would put him over Friend 1. 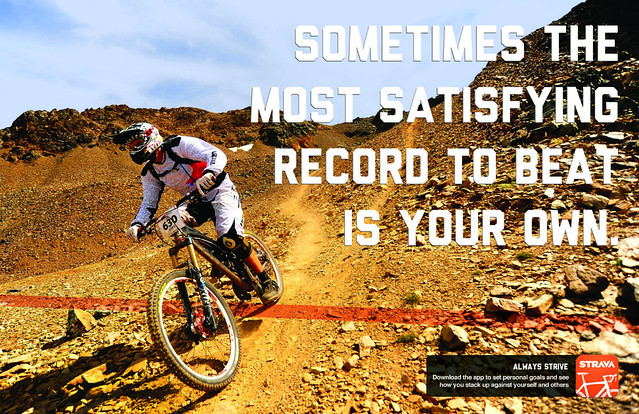 3. Ride with newbies. Recently I started riding with one of my buddies from church who just got into the sport. He’s pretty fired up and because of it, he was able to influence some of his coworkers into joining him. Sure enough every Tuesday and Thursday for the last few weeks I’ve been joining their group of 6+ riders on a fun pace with tons of jokes and laughter. It really us fun to ride with guys who are just getting into it because if you recall how it was for you, anything new is like a adventure.

4. Use riding as a form of exercise. Believe it or not, riding your mountain bike does burn calories! Ya, so that means rather than going to the boring gym, go out for a ride. Use mountain biking as a cross trainer for other sports like hop-scotch, kick ball, and noodling.

5. Last but not least, hit up a different trail. Nothing says new than a new trail. One of the rides I recently went on was with Cuz’n Joe. He took me part of a trail that I’ve never been before and I LOVED IT! I want to go back again but I don’t know my way around the area yet. So until I do, I’ll need a guide.

Hopefully these simple tips can help you not feel burnt out and get you back in the saddle. If not, you could always get into collecting cats.

Newbie Riders…should you spend the money or not?

1 thought on “Do you ever feel burnt out from riding?”