Wow, talk about being busy riding. Over the weekend the MtnBikeRiders.com Crew were hard at work riding bikes. Yeah we were testing products and all that jazz. So here’s a recap.

Early Saturday morning I met up with one of our readers who only goes by the name of “Dial Tone.” He never did explain what his moniker meant, all he said was, “If I told you, I’d have to kill you…” I took his word for it. Anyhow, DT and I were talking the night before and he mentioned how he was mis-shifting badly. I directed him to watch a video I made a while back on how to tune a rear derailleur. Though he followed the steps, he still had issues. At that time, I offered to check out his bike the following morning. Since I was meeting Cousin Joe at a trail head near DT’s home, we scheduled to meet at 6:20am.

After messing with the adjuster barrels, I noticed that his derailleur hanger was bent. Lucky for DT I carry my Park Derailleur Hanger Alignment Tool in my car, why? Cuz’ you never know if you’ll need it. 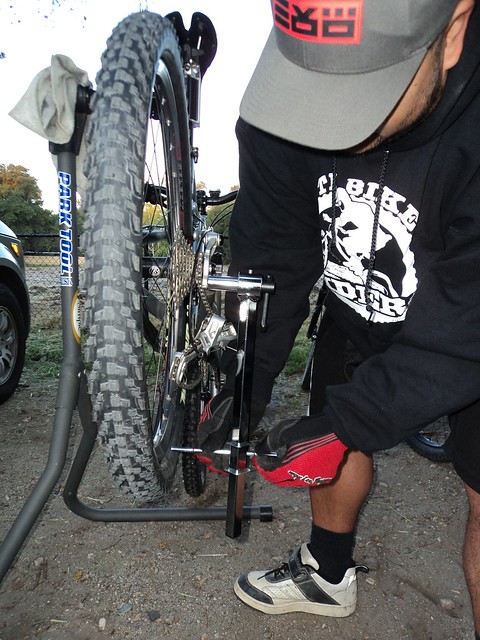 Mind you, while I’m doing all this so-called work, Priscilla is at the Fullerton Loop, picking on some guys wearing spandex…Here’s what her FB status said…

Fully loop is in great condition. Thanx to the guy in spandex who kept me on my toes…too bad for him I caught up to him on the last 3 mile stretch. His flat tire = fail! HEHEHE! SUCKA! ;D

But I digress, once DT was all “DIALED” in..get it, Dial Tone…Dialed in…eh nevermind, it was funnier in my head. Back to my story. Cousin Joe shows up so we can do some field testing on a few products. Check out our new “practice” jerseys, we call it the Kung Fu Panda. It has the MtnBikeRiders.com logo on the left shoulder. 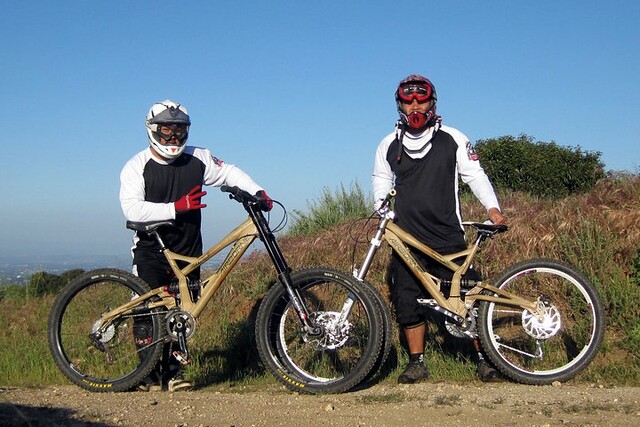 Joe points to the nearest Starbucks. 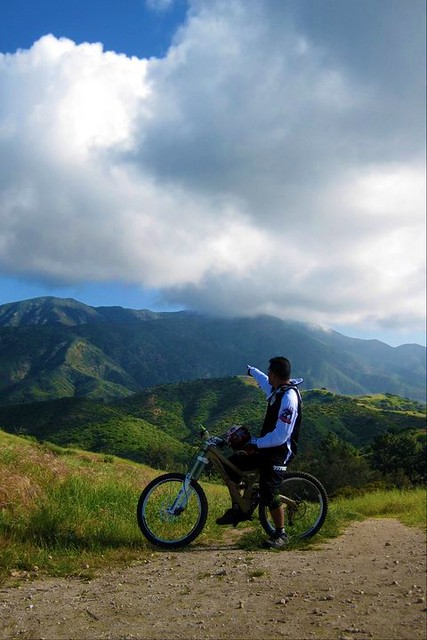 Here’s me getting RAD on the trail. I’m certainly putting the Cane Creek Angleset to work. 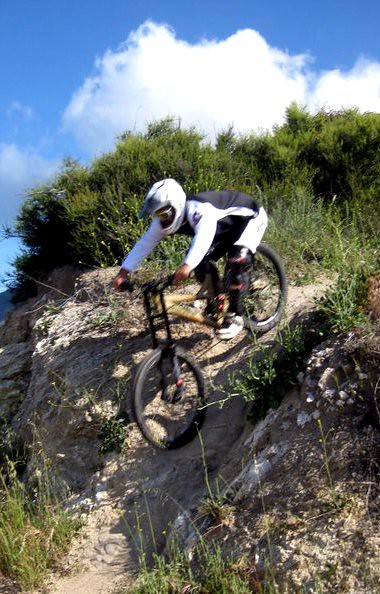 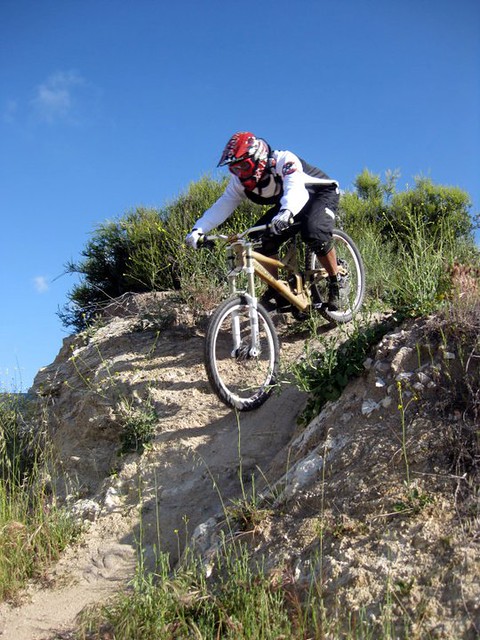 Unfortunately, I crashed on my first run. I pinched my front tire on some rocks, air all gone. I was going pretty fast, lost control, hit a rosemary bush and I went over the bars. I landed on my head/shoulder. I was laid out for a few minutes groaning. Once I did my “wiggle test” I got up and started walking down the mountain. Before our next run, I had to stop and fix the flat. 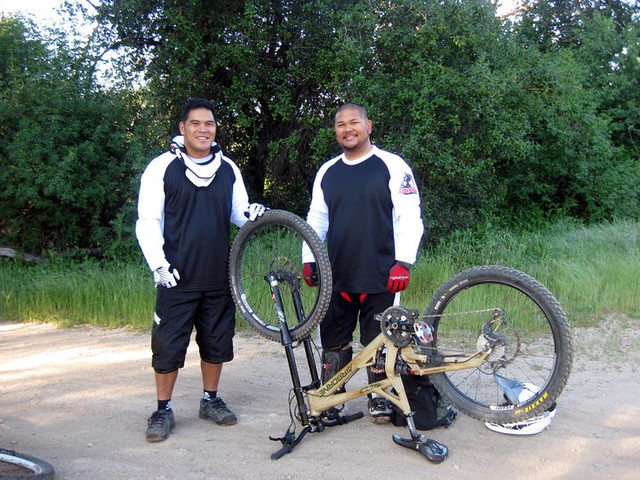 We headed back up the mountain to do another run, and when we got back to the car, we saw World Famous Guitarist, Perfecto De Castro. 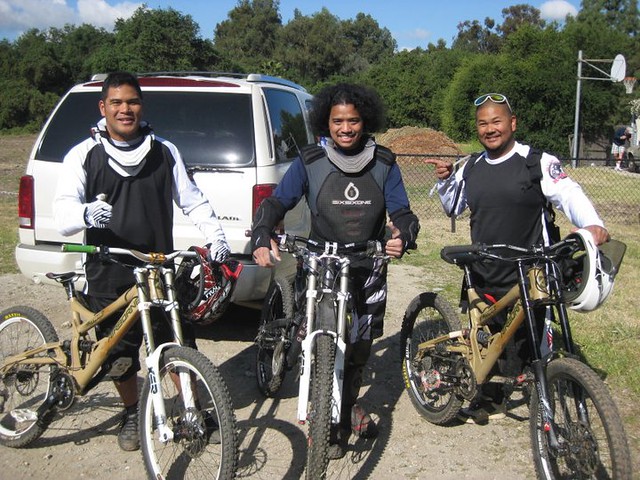 On Sunday, Cousin Joe did some more riding/testing at another super secret DH proving ground. 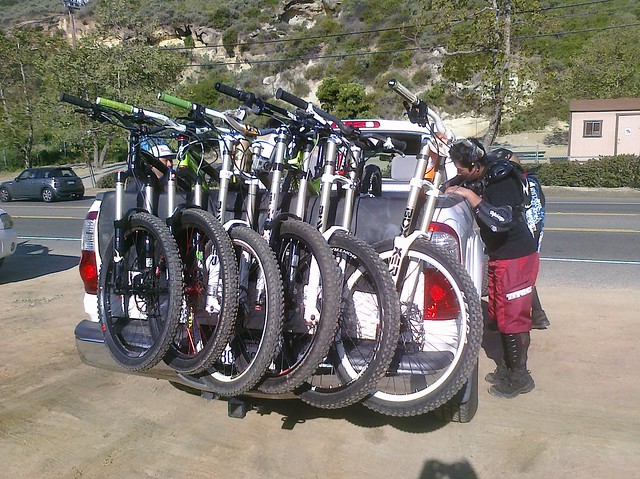 While Joe was out testing, Team Racer, Moe Ramirez was out racing at the Golden State Series #2 in Woodward West. Moe took a respectable 6th place in the event. 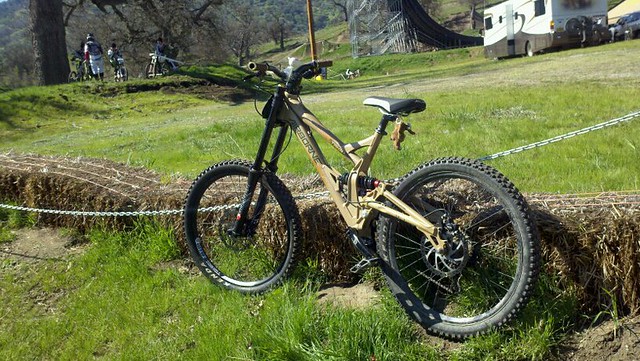 All in all, great weekend for the crew. Pretty busy if you ask me, but that’s the kind of busy you want…What about you? Did you do any riding?

One Reply to “What a busy weekend!”